I am really excited to hunt a property again that has what I believe is the perfect setup. There is a small finger of woods that divides two food plots, and I have a tree stand located in the middle of it. The deer bed in the woods is to the west of both plots and I enter the stand using an old gravel driveway from the east. When there is a west wind, my scent never touches anywhere that a deer would normally travel, and my walk in/out is covered by a row of trees. The deer don’t usually enter the large ag fields to the east until well after dark. 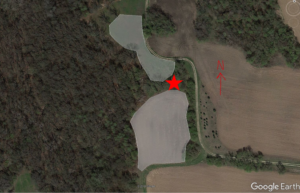 The grey areas are planted in soybeans this year, which will be a great food source both during the early season when the leaves are still green and palatable, as well as during the late season, when the bean pods will become attractive.

When you are thinking about how to hunt a property, your entry and exit strategy should be the first consideration. Even if you have to hunt the fringes of what you would consider the home range of a shooter buck, hunting the edges in a way that minimizes intrusion will allow you to hunt the stand multiple times throughout the season. The opposite approach is to determine where the buck is bedding, crash in on that location, and hunt it one time. I’m not the type of guy that does a lot of hang and hunts, so I like to have stand setups that I can use multiple times throughout the year and still have action like it is a virgin sit.

The last time I hunted this stand was on November 4th of last year and the fields were planted in corn. Within 30 mins of getting to the stand, I had several small bucks eating along the edge of the field. Within an hour of being on stand, one of my shooter bucks came out chasing a doe. It was a buck that had multiple beams and would have easily scored in the 150s. 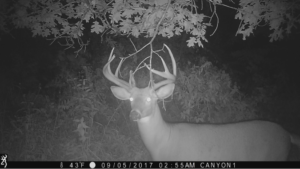 Unfortunately, he had broken off one of his main beams, so I elected to let him walk. Here is what he looked like on Nov 4th when I had him in bow range: 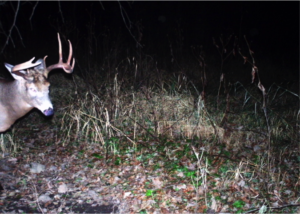 This year, I will be paying close attention to my DeerCast app, brought to you by Drury Outdoors to determine which days will bode well for daylight movement. The app looks at local weather data to determine when deer will most likely be active. When hunting food plots, the weather plays such a critical role in when they get up from their bed to go eat. The app pays attention from everything to temperature relative to average, pressure, wind speed, wind direction, and cloud cover. I don’t have time to look up each of those individually, so having the app do it for me will be a life saver. Stay tuned to our social media feed as we will post updates as well as trophy pics for all of the Ani-Logics family of employees and Pro-Staff for the upcoming season.