We are now approaching the most depressing time of year to be a die-hard deer hunter.  Bucks are losing antlers and the only hunting season open right now is coyotes and our turkey season doesn’t open for another month and a half.  Shed hunting should be getting good soon, but right now, snow conditions are not conducive to walking long distances and fear of stressing out deer at this critical time of year, has me waiting.  This is also a time when protein sources are dwindling across the landscape and deer are forced to move long distances to secure food or hunker down in one area and burn fat for several weeks on end.

For those of you that keep trail cameras out year-round, the pictures are not as appealing because the bucks have been reduced to circles on their forehead. 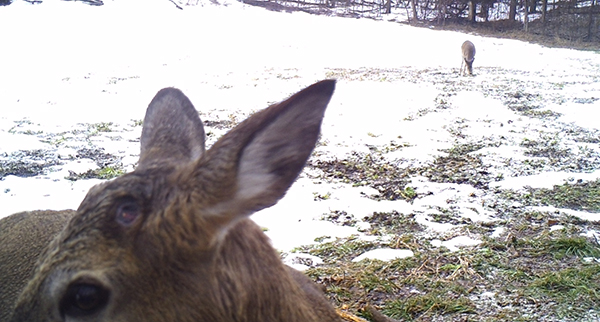 My favorite past time this time of year is to go back and look at pictures I have of bucks with their antlers from earlier in the year and try to recognize bucks by their facial features.  It will help you identify deer later in the year even if their antlers aren’t exactly the same as they were the years prior.  You can’t really call yourself a trail cam addict, until you can identify bucks by the faces.

Now let’s talk about what you can do to help on the protein side of things.  If you know there are starving deer in an area where they haven’t been given feed, do not start dumping big piles of feed on them or they can starve to death with full stomachs.  This is because a starving deer doesn’t have the proper microbial environment within their stomach to rapidly digest large amounts of grain-based feed.  The idea then would be to slowly introduce food and gradually increase amounts, so deer can gradually nurse themselves back to a healthy state.  Cue our Ani-Supplement Gold®.  Start by putting out 10lbs. in one area, then come back in a day or two and put out another 15lbs., come back again in three days and put out 25lbs. and gradually work the amounts up, so that deer are not given a massive amount on day one.

The best way to avoid having to gradually feed deer in late winter is to start your feeding program sooner, before the deer are in poor condition.  If they can tread water with the amount of fat they need to burn, they will not need to “fuel the fire” as often when it comes to maintaining their core body temp.  This winter has been unusually mild compared to most winters, but that doesn’t mean it’s a walk in the park for deer.  Many areas have too many deer for what the habitat can support and you may not have enough access to surrounding land to thin out enough deer during the hunting season, so feeding on your property will help increase the condition of the deer you will be hunting next fall.  You might even recruit bucks from your neighbor’s property and add to your shed pile.  If a buck likes your property enough, there is a good chance he will stay in the area in the fall.

So even though it’s the pre-spring lull, there are ways to keep your deer happy and healthy.  Training your eyes to recognize shed bucks is a fun way to keep tabs on deer year-round and will keep you focused on year-round management of your herd.  When we say, “There is No Off Season” we mean it! 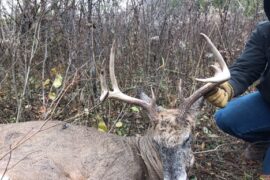 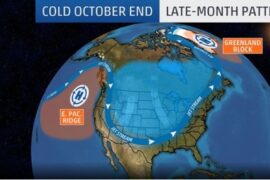